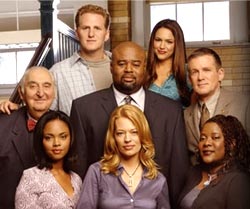 It's in 2000 when David E. Kelley, author and creator with success, known for its series judicial as "Ally McBeal" or "The Practice" among others, created the series "BOSTON PUBLIC". He joined for this production to the 20th Century Fox Television

With a format of one episode a week, 42 minutes, this dramatic series was diffused for the first time in the United States on September 23, 2001 on Fox

Synopsis: "BOSTON PUBLIC" investigates the universe of the public secondary school Winslaw in Boston. The heroes are not the students but ten teachers and the provisor (the high school students are not absent). All the subjects are approached: violence, social and racial tensions but always with humour.

There is no free violence in the series, no treasons, or of plots; but on the contrary a kind of "pleasure to live", although in every episode of the difficulties are to surmount. The characters are charming, they know how to support themselves mutually in the difficulties of every day. We are under the charm of these women and these men devoted who put all their heart to make their profession by trying to surmount the adversities of the current life in a secondary school. We meet them in the professional and private life, we thus have the scene and the wings of their everyday life. When we looked at some episodes we are taken by the charm of the series and we regret that it had only four seasons. All the actors are between very good and remarkable, and take a real pleasure to make us share their feelings.

Sean appears in the 3rd episode of the season 1, entitled "Chapter Three" in the role of a high school student David.

Summary of the episode: While the management committee of the secondary school has to rule on the dismissal of Harper (a teacher), the tension rises among the pupils. Players of the team of football think that one of theirs is a homosexual.

Regrettably, no photos of Sean extracted from this episode.